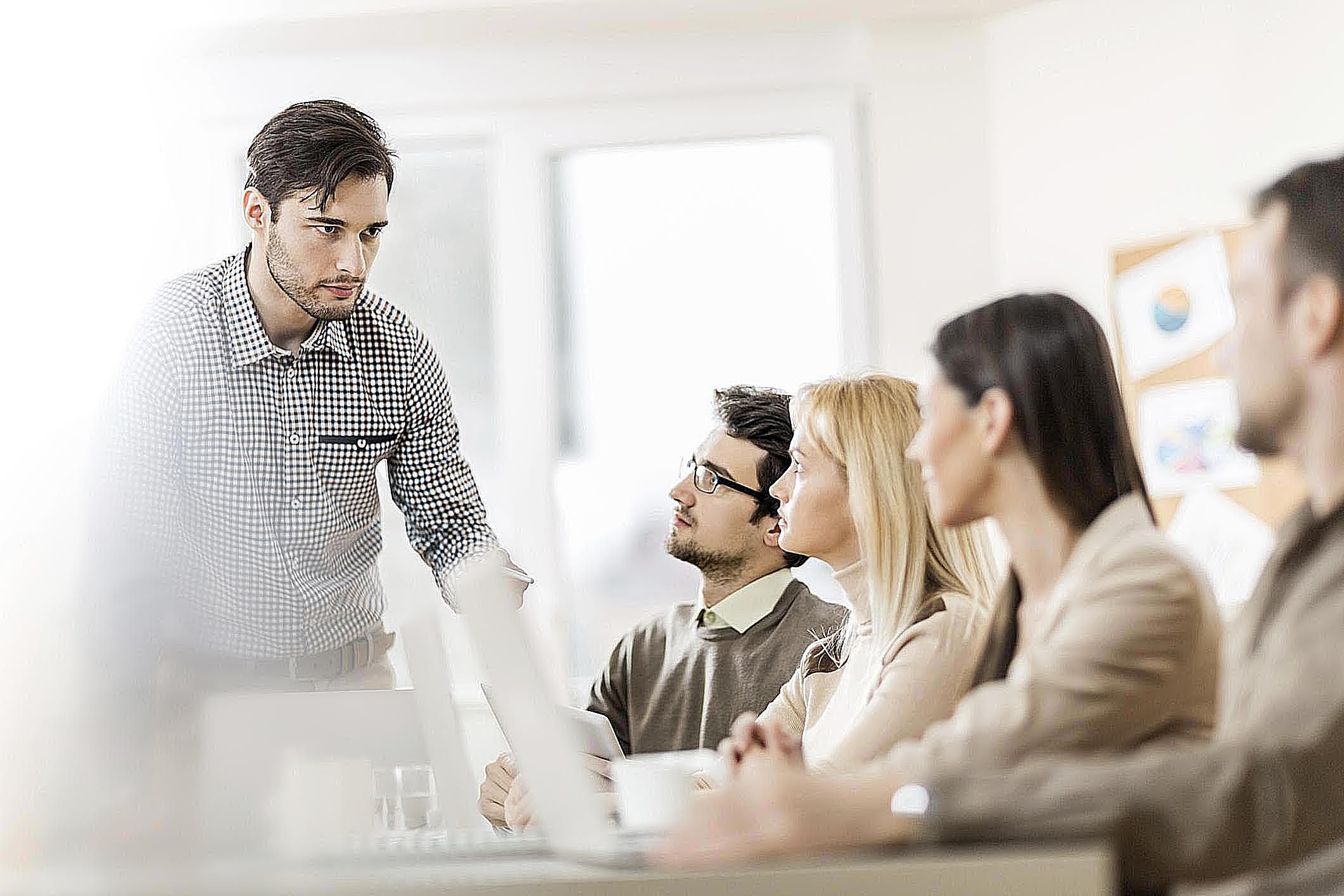 The problem in leading any group is that people inevitably have their own agendas. If you are too authoritarian, they will resent you and rebel in silent ways. If you are too easygoing, they will revert to their natural selfishness, and you will lose control. You must create a chain of command in which people do not feel constrained by your influence yet follow your lead. Put the right people in place, people who will enact the spirit of your ideas without being automatons. Make your commands clear and inspiring, focusing attention on the team, not the leader. Create a sense of participation, but do not fall into “Groupthink”, the irrationality of collective decision making. Make yourself look like a paragon of fairness, but never relinquish unity of command.

In difficult times and conflictual situation, it is not men, but the man, that counts. Unless you adapt your leadership style to the weaknesses of the people in your group, you will almost certainly end up with a break in the chain of command: information in the field will reach you too slowly. A proper chain of command, and the control it brings you, is not an accident; it is your creation, a work of art that requires constant attention and care. Ignore it at your peril.

As a leader, you must hold yourself back. For most of us, the temptation is to do combat with everyone in every problematic area such as the recalcitrance of the heads of departments, the political feuds, and the layers of waste. First, you must be smart enough not to give into that temptation. There are too many battles to fight, and they would exhaust you. You will get frustrated, lose time, and probably give yourself a heart attack. Second, by trying to micromanage your departments, you will become embroiled in petty entanglements and lose sight of the larger picture. And finally, you will come across as a bully. The only way to slay this many-headed monster is to step back. Rule indirectly through others, controlling with such a light touch that no one would realize how thoroughly he is dominated.

The key to the “Command and Control Strategy” is your selection, grooming, and placement of your proteges. Clone yourself in these men, who will enact the spirit of your reforms on your behalf, saving you time and making you appear not as a manipulator but as a delegator. Your cutting of waste will be heavy-handed at first, but once you will have put your stamp on the departments, it you are supervising, they will run efficiently on their own: fewer people to deal with, fewer irrelevant reports to read, less wasted time on every level. This streamlining achieved; you will be allowed to guide the machine with a lighter touch. The political types who were clogging the chain of command will either retire or join in the team spirit you infused.

Today's social, political, and economic world is complex and chaotic. It is harder than ever to exercise control through a chain of command. You cannot supervise everything yourself. You cannot keep your eye on everyone. Being seen as a dictator will do you harm, but if you submit to complexity and let go of the chain of command, chaos will consume you.

The solution is to operate through a kind of remote control. Hire people who share your vision but can think on their own, acting as you would in their place. Instead of wasting time negotiating with every difficult person, work on spreading a spirit of camaraderie and efficiency that becomes self-policing. Streamline the organization, cutting out waste, in staff, in the irrelevant reports on your desk, in pointless meetings. The less attention you spend on petty details, the more time you will have for the larger picture, for asserting your authority generally and indirectly. People will follow your lead without feeling bullied. That is the ultimate in control.

Now more than ever, effective leadership requires a deft and subtle touch. The reason is simple: we have grown more distrustful of authority. At the same time, almost all of us imagine ourselves as authorities in our own right, officers, not foot soldiers. We live in a world where there are too many chiefs, not enough soldiers. Feeling the need to assert themselves, people today put their own interests before the team. Group unity is fragile and can easily crack. These trends affect leaders in ways they barely know.

Today, the tendency is to give more power to the group: wanting to seem democratic, leaders poll the whole staff for opinions, let the group make decisions, give subordinates input into the crafting of an overall strategy. Without realizing it, these leaders are letting the politics of the day seduce them into violating one of the most important rules of leadership: unity of command. Divided leadership is a recipe for disaster.

Divided leadership is dangerous because people in groups often think and act in ways that are illogical and ineffective, call it “Groupthink.” People in groups are political: they say and do things that they think will help their image within the group; they aim to please others, to promote themselves, rather than to see things dispassionately. Where an individual can be bold and creative, a group is often afraid of risk. The need to find a compromise among all the different egos kills creativity. The group has a mind of its own, and that mind is cautious, slow to decide, unimaginative, and sometimes downright irrational.

This is the game you must play: do whatever you can to preserve unity of command. Keep the strings to be pulled in your hands; the over-arching strategic vision must come from you and you alone. At the same time, hide your tracks: work behind the scenes; make the group feel involved in your decisions; seek their advice, incorporating their good ideas, politely deflecting their bad ones. If necessary, make minor, cosmetic strategy changes to assuage the insecure political animals in the group, but ultimately trust your own vision. Remember the dangers of group decision making. The first rule of effective leadership is never to relinquish your unity of command.

Control Is an Elusive Phenomenon

Often, the harder you tug at people, the less control you have over them. Leadership is more than just barking out orders; it takes subtlety. A critical step in creating an efficient chain of command is assembling a skilled team that shares your goals and values. That team gives you many advantages: spirited, motivated people who can think on their own; an image as a delegator, a fair and democratic leader; and a saving in your own valuable energy, which you can redirect toward the larger picture.

In creating your team, look for people who make up for your deficiencies, who have the skills you lack. Be careful in assembling your team that you are not seduced by expertise and intelligence. Character, the ability to work under you and with the rest of the team, and the capacity to accept responsibility and think independently are equally key. You may not have as much time to spare, but never choose a man merely by his glittering resume. Look beyond his skills to his psychological makeup. Rely on the team you have assembled, but do not be its prisoner or give it undue influence.

A key function of any chain of command is to supply information rapidly from the trenches, letting you adapt fast to circumstances. The shorter and more streamlined the chain of command, the better for the flow of information. Even so, information is often diluted as it passes up the chain: the telling details that reveal so much become standardized and general as they are filtered through formal channels. Some on the chain, too, will interpret the information for you, filtering what you hear. To get more direct knowledge, you might occasionally want to visit the field yourself to see with your own eyes how your reforms are taking effect. But in these days of increasing complexity, this can consume far too much of your time.

What you need is a “directed telescope”: people in various parts of the chain, and elsewhere, to give you instant information from the field. These people, an informal network of friends, allies, and spies, let you bypass the slow-moving chain. At a moment's notice, send one of these men in the action, with secret instructions to gather the kind of information he could not get fast enough through normal channels. In general, it is important to cultivate these “directed telescopes” and plant them throughout the group. They give you flexibility in the chain, room to maneuver in a generally rigid environment. The single greatest risk to your chain of command comes from the political animals in the group. People like this are inescapable: they spring up like weeds in any organization. Not only are they out for themselves, but they build factions to further their own agendas and fracture the cohesion you have built. Interpreting your commands for their own purposes, finding loopholes in any ambiguity, they create invisible breaks in the chain.

Weed Them Out Before They Arrive

In hiring your team, look at the candidates' histories: Are they restless? Do they often move from place to place? That is a sign of the kind of ambition that will keep them from fitting in. When people seem to share your ideas exactly, be wary: they are probably mirroring them to charm you. Another solution is to isolate the political moles, to give them no room to maneuver within the organization. In any event, do not be naive. Once you identify the moles in the group, you must act fast to stop them from building a power base from which to destroy your authority. Finally, pay attention to the orders themselves, their form as well as their substance.

Vague orders are worthless: as they pass from person to person, they are hopelessly altered, and your staff comes to see them as symbolizing uncertainty and indecision. It is critical that you yourself be clear about what you want before issuing your orders. On the other hand, if your commands are too specific and too narrow, you will encourage people to behave like automatons and stop thinking for themselves, which they must do when the situation requires it. Erring in neither direction is an art.

Fill your orders with juicy details, which will give your people a feel for how your mind work while also allowing them interpretive leeway. Spell out possible contingencies, suggesting ways they could adapt your instructions if necessary. Most important, make your orders inspiring. Make sure your language communicates the spirit of your desires. A beautifully worded order has extra power; instead of feeling like a minion only expected to execute the wishes of a distant commander in chief, the recipient becomes a participant in a great cause. Bland, bureaucratic orders filter down into listless activity and imprecise execution. Clear, concise, inspiring orders make people feel in control and fill troops with fighting spirit.

No Good Can Ever Come of Divided Leadership.

If you are ever offered a position in which you will have to share command, turn it down, for the enterprise will fail and you will be held responsible. Better to take a lower position and let the other person have the job. It is always wise, however, to take advantage of your opponent's faulty command structure. Never be intimidated by an alliance of forces against you. If they share leadership, if they are ruled by committee, your advantage is more than enough. In fact, seek out adversaries with that kind of command structure. You cannot fail to win.